Voltage spikes of up to 1.8 million volts streak across the test room in a millionth of a second. The source is an impulse generator and the location is the Maschinenfabrik Reinhausen Research Centre in Regensburg, Germany. 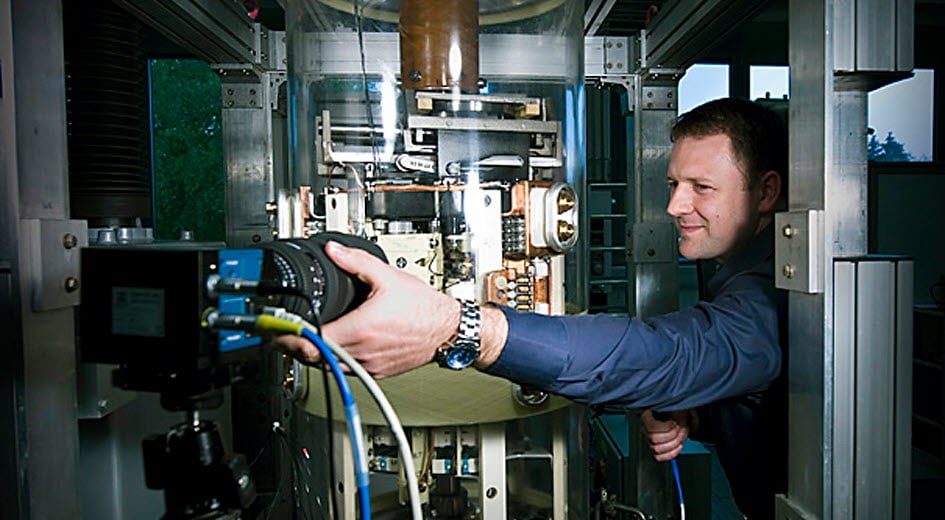 Power engineering is the Reinhausen Group’s core business. Its headquarters are in the Reinhausen district of Regensburg. It has 24 subsidiaries around the world and 2,800 employees. Group sales in 2011 reached more than 600 million euros. Its customers are manufacturers of high-voltage equipment and systems, power utility companies and large-scale industries with intensive power requirements.

MR is a family-run business that has remained independent since 1868. In 1926, Bernhard Jansen invented the high-speed resistor-type tap changer that allowed the turn ratio of transformers to be changed under load without interruption. In cooperation with the brothers Oskar and Richard Scheubeck, this product ultimately became known around the world by the name of Reinhausen On-load Tap Changer.

Voltage spikes of up to 1.8 million volts streak across the test room in a millionth of a second. The source is an impulse generator and the location is the Maschinenfabrik Reinhausen Research Centre in Regensburg, Germany.

Maschinenfabrik Reinhausen's core business is the regulation of power transformers. Indeed, it’s the world market leader, with more than half of the world’s electricity running over MR tap changers.

Around 100 people work at MR's high-tech laboratory, opened in 2008 at the company headquarters. At the lab, on-load tap changers are subjected to stringent tests in the high-voltage, power and mechanical laboratories to make sure the switches function reliably at all times, over and above normal operational loading.

The range of equipment at the hightech laboratory is unparalleled. “No other tap changer manufacturer has this unique combination of facilities,” says Dr Thomas Strof, Manager Product Approval Testing. Products are subjected to two stages of testing, he says. “There are the development tests, where we use prototypes to push the test object to its limit, followed by type tests, where we check that products meet international standards and fit in with the production process.”

To reduce testing time, which can take up to several months for mechanical tests, equipment is tested day and night, 365 days a year. Endurance tests with up to 1.5 million switching operations (international standards require only 500,000) ensure the functional capability and reliability of the tap changers.

The endurance tests vary greatly. In one of them, transformers generate AC voltages of up to 700,000 volts to simulate loads that occur in high-voltage electricity transmission networks. In another, digital measuring systems capture voltages as low as a millionth of a volt to ensure that there are no defects in insulating materials.

Oil has an important role to play. In most cases tap changers are immersed in an insulating oil, so 200,000 litres of oil are pumped through the building to ensure a constant supply to simulate the environment for testing purposes. Nynas is the prime supplier of insulating oil at the centre. “The clarity and quality of Nynas’ oil is perfect for use in high-voltage testing,” Strof says.

Both companies are part of a marketing network of 10 manufacturers producing different components for transformers. The group, called Transform, was set up in 1998 by MR.

The marketing group arranges an international conference every two years and cooperates in customer lectures and exhibitions.

Nynas has the world's widest range of transformer oils – developed to handle just about every conceivable climate, design and operating condition.

See a selection of our transformer oils based on their key characteristics, including viscosity. For more information on each product, simply download the relevant Product and Safety Data Sheets. See all products